Earlier this year I was on StumbleUpon (a website that links you to random websites around the internet) when I came across a random fact generator. One of the facts that sparked my interest was a claim that sex could relieve a headache because of the bodies natural pain relievers released during intercourse. I hadn’t thought much more about this statement until we were asked in this class to find a topic relating our daily lives to organic chemistry. I decided to investigate this claim further and see how exactly the human bodies biochemistry altered during sex? What molecules were released during sex? What are the therapeutic benefits of sexual intercourse? And finally, as my research into the subject deepened, I wanted to find the biochemistry behind the emotions we feel from sex and how humans benefit from sexual intercourse?

Sexual Intercourse plays an essential role in the lives of almost every person on a daily basis both directly and indirectly. Men and woman both experience a direct chemical drive for sex from years of evolution; this is what pushes humans towards procreation. Sexual selection has developed substantially over the years to determine what are desirable traits in a mate and this can cause changes in human behavior. Men and women are encouraged to appear attractive, strong and provide good traits that can be passed down to their offspring. One of the best places to see the results of the human need for sex is on college campuses. College students strive for the sexual attention of their desired mate. They do this by interacting with one another through school and social activities. What many college students don’t think about is how their bodies are reacting internally from sex.  Aside from the more apparent superficial results of sex, there are a number of internal biochemical reactions that occur in the body. There are many molecules released in the body before, during and after sexual intercourse including serotonin, oxytocin and dopamine to name a few. Some of these molecules can have long-term effects on humans that can alter behavior, while others have shorter more immediate consequences. I am seeking to discover how these molecules can be therapeutic and beneficial for humans. Whether it is through direct interaction of these specific molecules or through indirect stimulation of other chemicals and receptors in the body.

Serotonin, also known as 5- hydroxytryptamine or 5-HT, is a monoamine neurotransmitter. It is found in platelets, the gastrointestinal tract and in the central nervous system. It has an aromatic structure due to the fact it is biochemically derived from the amino acid tryptophan.
Overall serotonin increases happiness in humans but it also has control over appetite and sleep. For our purposes, we are concerned with its affect over mood. Serotonin is released during sexual intercourse and afterwards as sexual partners develop deeper emotional attachment to one another. Serotonin is released at the synaptic cleft of neurons and it works by interacting with the 5-HT receptor, which is a group of G-coupled protein receptor and ligand-gated ion channel. G-coupled protein receptors are transmembrane receptors that respond to external signals binding to the outside of the cell. This binding causes a conformational change in the G-coupled protein receptor allowing it to act as a guanine exchange factor, which exchanges guanine diphosphate for guanine triphosphate. Once activated, G-coupled protein receptors will signal transduction in a number of different ways. For instance, the 5-HT2A serotonin receptors signals the release of diacylglycerol (DAG) and inositol triphosphate (IP3) which in turn induces a further kinase signaling cascade and calcium release. (See figure below) 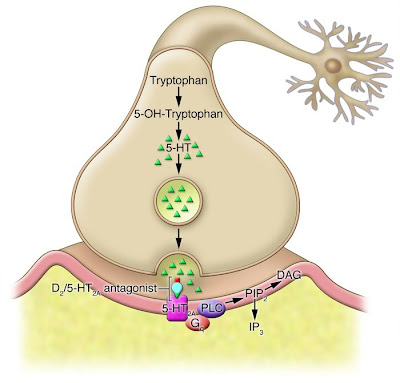 In terms of sexual intercourse, binding of serotonin can produce changes in sexual behavior, penile erection and mood. Serotonin can also benefit humans indirectly by stimulating endorphins, which can have analgesic properties by reducing pain perception. By increasing happiness, serotonin can benefit humans as a natural antidepressant. In fact, many antidepressant drugs work to prevent loss of the 5-HT serotonin receptor, which allows for better uptake of serotonin and an increase in happiness. An increase in happiness stimulates a deeper emotional attachment to a sexual partner, and aside from the beneficial increase in mood, this helps humans to find a long-term partner to produce offspring with.

Dopamine is another neurotransmitter released during sexual intercourse. It has a catechol structure with an amine group attached to it.

Dopamine is biosynthesized in the neurons of the medulla of adrenal glands. Dopamine interacts with 5 receptors in the body know as D1, D2, D3, D4 and D5. Dopamine release has a variety of effects on the human body including increase in heart rate and blood pressure. Additionally, dopamine plays a role in pain reception in the central nervous system. Higher levels of dopamine are associated with increased pain tolerance. The analgesic effects of dopamine are mainly a result of interaction with the D2 dopamine receptor. In this way the release of dopamine by sexual stimulation can be advantageous when suffering from a headache or any other type of painful ailment for temporary relief. Aside from pain relief, a study by Dr. Bianca P. Acevedo on Neural correlates of long-term intense romantic love, showed that individuals who stated that they were in love showed higher brain activity in the dopamine-rich, reward regions of the ventral tegmental area/substantia nigra of the brain. (See figure below part A) 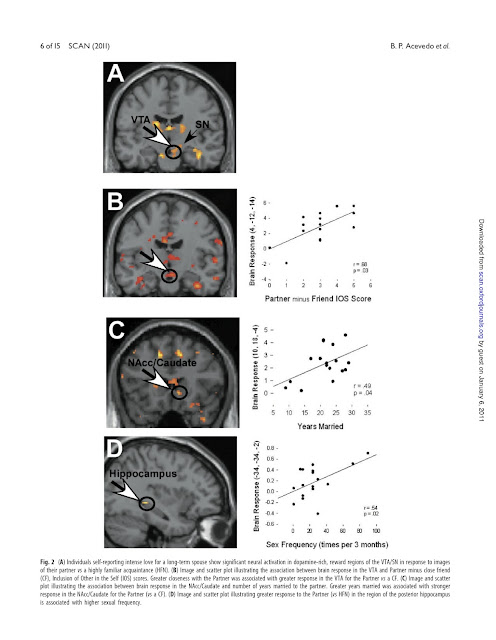 The reward system of dopamine provides humans with an incentive to not only have sexual intercourse but to continue having relations with the same partner. Both of these stipulations are advantageous to the process of human evolution and procreation, along with the personal benefits of an increased mood and decreased pain perception from dopamine release.


Oxytocin has often been called the love drug and for good reason. It is an important biomolecule associated with love, sex and the entire process of childbirth and early development. It is a hormone that acts as a neuromodulator in the brain. Oxytocin is a peptide that is 9 amino acids long. It contains 2 cysteine residues that allow for a di-sulfide bridge. 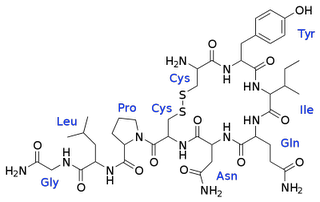 Oxytocin acts in the body by interacting with oxytocin receptor, which is another G-protein coupled receptor that requires magnesium and cholesterol. Oxytocin is perhaps the most beneficial molecule released from sex. Higher levels of oxytocin have correlated with increased wound healing. It is postulated that oxytocin works by reducing inflammation that allows for an increase the healing wounds. Oxytocin may also be involved in facilitating the human orgasm as increased levels of plasma oxytocin have been found during and after an orgasm has occurred. Similar to dopamine and serotonin, oxytocin can be involved in the development of long-term relationships. In an experiment by neuroeconomist Paul Zak, subjects were administered oxytocin nasally asked to make financial transactions with a partner. Generosity and concern for their partners well being was measured by monitoring the subject’s willingness to make financial deals with one another. Subjects who had been administered oxytocin were found to 80% more generous than those who had been administered a placebo. The actions of the test subjects are synonymous with qualities of building trust and long term relationships. Generosity, empathy, maternal behavior and bonding have all shown to be coupled with higher levels of oxytocin.  Oxytocin benefits do not stop after sex. Once pregnancy has occurred, oxytocin remains an important hormone throughout the birthing process and after, as it help woman to eject milk from their breasts when feeding their newborns.

The impact of sexual intercourse on human behavior is substantial. One can only begin to understand the gravity of sexual intercourse by understanding the myriad of biochemical occurrences in the body. Serotonin, dopamine, oxytocin and their respective receptors are only a fraction of the molecules released as a result of sex but their impact is considerable. While the goal of sexual intercourse is to produce offspring in order to ensure the survival of a population, years of evolution have produced a reward system that benefits humans in a variety of ways. These benefits can be as direct and simple such as pain relief or can be a complex mixture of reactions that accumulate to a larger result, such as two people committing to a long-term relationship. Whether people are aware of it or not, sexual intercourse will continue to have a profound impact on their daily lives. 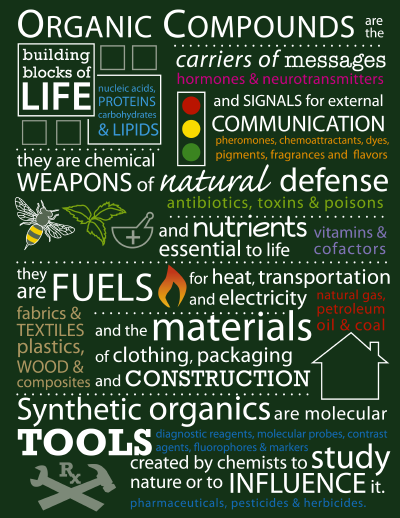